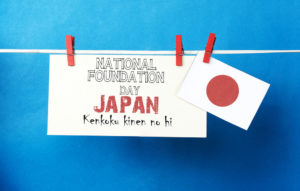 In the traditional lunisolar calendar, the National Foundation Day is celebrated on the New Year’s Day. National Foundation Day, also called as Kenkoku Kinen no Hi, is a national holiday in Japan which is held on the 11th day of February every year. This festivity aims at celebrating the foundation of Japan and the accession of its first emperor, Jimmu.

In the Meiji period, the Japanese government designated the day as a national holiday. Because the origin of this holiday coincided with the change from the lunisolar calendar to the Gregorian calendar in 1873, it led people to see the day as a Lunar New Year, instead of National Foundation Day. In response, the government moved the holiday to February 11 of the Gregorian calendar in 1873.

In its original form, the holiday was named Empire Day or Kigensetsu to honor the foundation of Japan by emperor Jimmu. The national holiday was supported by those who believed that focusing national attention on the emperor would give a sense of unity and nationalism among the people.

In the past, Kigensetsu was considered to be one of the four major holidays of Japan. Today, the celebration of the National Foundation Day is contrastingly different from that of their elaborate celebrations before. Gone are the fireworks, large parades and festivities that people put so much effort into. In some places, festivities are still held, but they aren’t as large as those held in the past. One of the highlights of the event is the float parade in the compound of Meiji shrine where people carry a miniature temple with their national flag, all decorated with ornaments as they carry it on their shoulders. Nowadays, instead of the elaborate celebrations, the National Foundation Day include the raising of Japanese flags and reflection on the meaning of Japanese citizenship.