Tanabata, also known as the Star Festival of Japan, is typically held on July 7, the seventh day of the seventh month. In some areas, where the lunar calendar is still used to calculate this holiday, it occurs on August 7. Our recent trip to Fussa showed the festival taking place on 7 – 10 August.

The festival is based on a Chinese legend, with some Japanese twists.

In one popular form of the legend (there are over a dozen different versions); Vega, known in Japanese as Orihime (the Weaving Princess) is the daughter of the Sky King. She works for her father weaving beautiful cloth on the shores of the river formed by the Milky Way. Since her father loved her cloth very much, she worked very hard every day weaving to please him. However, in her heart she was sad because the time spent at her work was keeping her from finding her soul mate.

Orihime’s father noticed her sadness and arranged for her to meet Altair (known in Japanese as Hikoboshi, the cow herder). Hikoboshi lived on the other side of the Milky Way.

The match was a hit, the two fell instantly in love, and were married soon after.

Trouble quicky arose as, due to their intense love, they each neglected their duties. Vega no longer wove her magic cloth and Altair let his cows wander all over the sky. Darn love-struck kids!

As punishment, the Sky Father separated the two lovers, one on each side of the river Milky Way. They each reluctantly returned to their duties.

However, Vega was so despondent that her constant sorrow touched the Sky Father’s heart. When she pleaded to let them meet again, he consented to allow them to meet once a year, if she worked hard and finished her weaving. Her deadline for completing her work was the Seventh day of the Seventh month. Vega returned to work with a passion and was able to complete her tasks before the appointed day.

On the date of their first reunion, they were still blocked by the river Milky Way. The Sky Father had only given them the time off to meet, not the means to meet. There was no bridge to cross the river. Separated by the impassable river, Vega cried so loudly that a flock of magpies took pity on her and promised to make a bridge of their wings so that she could cross the river. With the aid of the magpies, Vega crossed the river and had her long awaited reunion with her husband.

Because magpies don’t fly when it is raining, the legend says that if it rains on the day of Tanabata, the two lovers have to wait another year to meet. So rain on Tanabata is considered bad luck. 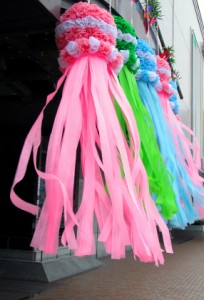 In modern Japan, Tanabata is a festival where children write their wishes on strips of fancy paper, called a tanzaku, which are then put on displays made of the branches of bamboo trees.

The Japanese twist is that instead of wishing for presents or candy, the industrious Japanese child (possibly emulating the hard working Vega), makes wishes for better handwriting or study skills. Other wishes can be for good sewing, safety and health for the family, good fishing and harvests, and even cleanliness.

You may also want to check another well celebrated Festival in Japan, the Hanami Party in Tokyo.